The city of Malaga has a special charm which makes it a must on any visitor's itinerary. Culture, traditions, gastronomy, an enviable climate and the relaxed, hospitable nature of its people serve to consolidate the image of “Paradise City”, the name used by Spanish poet and Nobel literature prize winner Vicente Aleixandre in reference to the city.

Malagueta Bullring and Port on the right

Capital of the Costa del Sol, this modern city has developed rapidly in the last twenty years or so but has, nevertheless, managed to preserve its essential character. Undeniably cosmopolitan, the city of Malaga has maintained its inherent Spanishness in spite of the enormous influence of foreign tourism on the province which has had a notable effect on towns and villages only a short distance away along the coast.

Visitors to the city should take the time to stroll around the centre and soak up the atmosphere of this ancient Mediterranean port. Malaga City Hall has recently introduced several schemes to renovate the city centre while keeping its traditional character intact. The focus of the city's commercial activity is Calle Larios from which a maze of narrow streets fan out and where old-fashioned shops alternate with modern bars and charming squares appear at the turn of a corner. 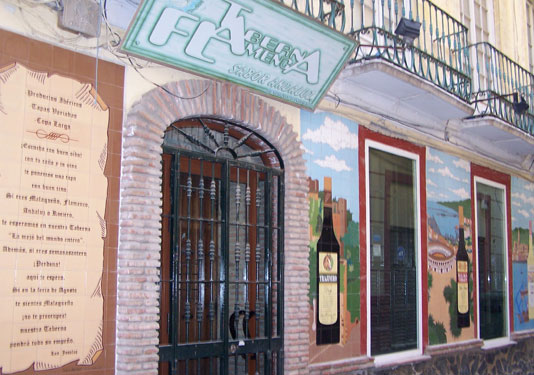 View of a typical bar on Larios Street

Vying for attention in the bustling commercial centre is an enormously rich patrimony of historical monuments, one of the oldest being the Roman amphitheatre, dating from the second century AD. Amazingly, it was only discovered by chance during the second half of this century when excavation work for another building revealed its existence! 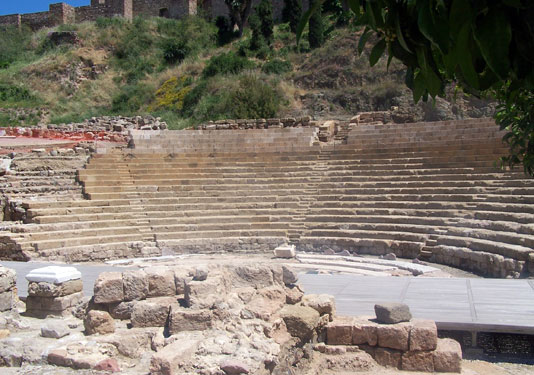 View of the Malaga's Roman Theater

Moving into the Christian era, one of the city's most important buildings is the sixteenth-century Renaissance palace of the Count of Bellavista which has exceptionally beautiful Mudejar-style coffered ceilings. It is currently the Museum of Picasso.

A seventeenth-century inn, known as the “Mesón de la Victoria”, one of the best-appointed of its time, is now the home of the folk museum. The two floors enclose a central cobbled patio with a fountain and a well, typical features of Malaga houses until not so long ago.

Malaga's cathedral is popularly known as "la manquita", the little one-armed lady, in reference to the fact that its second tower was never completed. Work was stopped by Royal Decree when the tower was only half built, The money was instead being assigned instead to aid the victims of an earthquake that had occurred in Mobile in the United States. Construction of the cathedral lasted over two centuries - from the second half of the sixteenth century to the last third of the eighteenth - which accounts for the interesting combination of architectural styles, from the Gothic in the lower part of the structure and one of the sanctuary doors, through Renaissance, to the late baroque decoration of the lintels and the main façade. The seventeenth-century choir is an exceptional piece of work with 40 of the 58 wooden figures carved by the famous sculptor Pedro de Mena. The magnificent organs, built by Julian de la Orden in 1871, are highly valued by musical experts, not only for their excellent construction technique but also for their great musical quality. 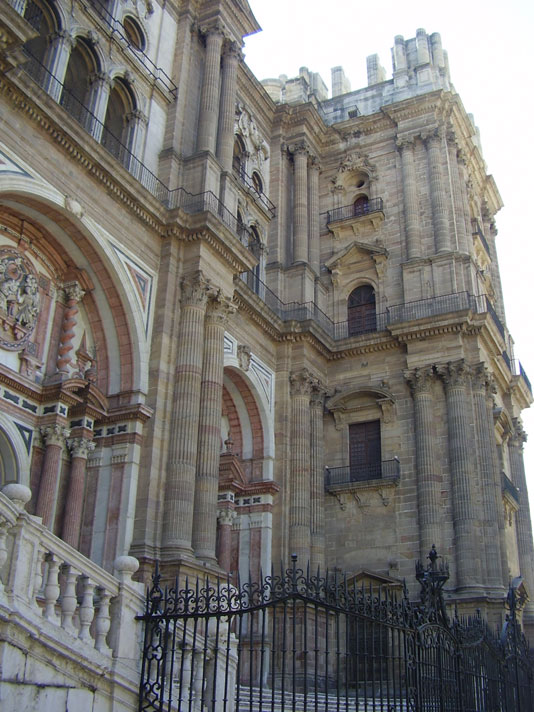 These days it is hard to imagine that the building known as the Palacio de Aduana, originally the custom house, was once located on the water's edge. At the end of the last century Malaga underwent a transformation and one of the most decisive changes was to reclaim the land in front of this building which is now the site of the city's botanical garden, known as El Parque. A quiet haven nestling in the midst of the bustling metropolis, the garden is one of the largest tropical and subtropical enclaves in Europe with around 160 different species of plants and trees.

Malaga also boasts other historical gardens such as La Concepción, where guided tours are available, and El Retiro, which houses a fine ornithological collection.